The killing of Cecil the lion has outraged the public and not simply because he suffered needlessly for days. Why has he reached our hearts when so many other animals are hunted & poached? Why is everyone – from animal advocates to hunters to talk show hosts to the New York Times and the Guardian – so horrified by this brutal killing? The answer lies in freedom.

Cecil’s right to life and his right to be undisturbed were violated. But we too were tricked, harmed, desecrated. Cecil, a 13-year old lion, lived safe in Hwange National Park in Zimbabwe under legal protection. But he was unfairly lured out of his refuge, tricked by poachers who tied a dead animal carcass to the back of a truck. Cecil, father to many cubs (who will likely now die), was an easy target while eating. Minnesota dentist and trophy-hunter Walter James Palmer then shot Cecil with an arrow. But Cecil suffered for 40 hours before he was tracked down, killed with a rifle, beheaded, and skinned. His body was left to rot in the sun. His head is missing, as is the now notorious trophy-killer.

Our right to freedom,  to a place in the world where legally protected wilderness and wildlife remain safe, was also violated. There is a distinct lack of democratic consent in the violation of anti-poaching laws, and it is not just Cecil’s lack of consent, but ours too. We are disgraced by transgression of moral law, by the loss of sanctuary, and by the bloodlust of leaving a privileged human community with the sole purpose of entering a wild community around the world to needlessly slaughter its magnificent alpha male. (This video shows Cecil with his cubs at the national park). 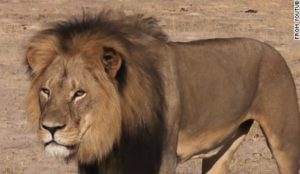 In doing so, this sport-killing dentist has left a morally repugnant graffiti upon a wild canvas. Like the graffiti left in Joshua Tree National Park by André Saraiva or the myriad defacements of an attention seeker who foolishly shared her vandalism at more than ten national parks on her social media accounts. The selfishness of killing, of vandalism, of littering are at the heart of our disgust. As much as littering in the forest is a trespass of a right to a wilderness free of human influence, so too is trophy hunting, and poaching of a lion in a sanctuary, a trespass of our right to biodiversity, to an asylum of wild that is free from human debauchery and brutality.

So our horror at this tragedy is that there are places and animals who should be left alone – and the majority of us have made that moral contract through international laws and cross-cultural understandings. That is our consent – we will not kill endangered animals for fun, and we will leave that which is wild alone, for all our sakes.

In violating those explicit and implicit agreements to leave wildlife alone, we destroy ecosystems and biodiversity that will not be there for future generations. This trophy-hunter dentist has deprived us of real freedom, and left a tainted tyranny from which we cannot escape. In many ways, these wild places we hold sacred, these safe havens for wildlife, are fundamental to a truly free world and a human right to have them. And that is what he transgressed by taking Cecil’s life in such a callous, and torturous way.

And in many ways this dentist is symptomatic of the worst of our American culture – and the ways our democracy has become perverted. He is symptomatic of a culture that celebrates unmitigated human power and dominance, qualities that are inherently problematic to a free democratic society. 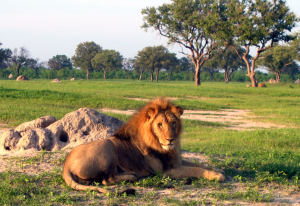 There are some who celebrate that human dominion. They believe all land, animals, and humans are for “use.” And they believe that environmental laws that limit the destruction of wilderness and wildlife somehow prohibit their right to what they call “freedom” but what they mean is “power.” This dentist didn’t want to be left alone when he killed two lions, a leopard, a rhino, and a bear. He just wanted to kill whatever he wanted to kill, and that isn’t freedom. It’s doing what he wants to do, regardless of the impact it has on others. Palmer, the trophy-hunting lion killer, already had a felony conviction for illegally killing a black bear. Clearly, he feels–no matter the feigned regret he claims–no obligation or moral duty to follow the laws that are our social contract with each other.

Real freedom is the ability to be free of that dominating influence of power. And that’s why we – and animals like Cecil – need serious wildlife protection laws if we want a truly free society. By protecting the sanctity of places that are free from human domination, we protect our own ability to be free.

By killing an animal that belonged to all of us, by not belonging to any of us, this power-hungry trophy-hunter put each of us in a cage where no matter what ends of the earth, an American can pay (his wealth a power over humans) to kill the wildest of animals in a place that was supposed to be safe. Is there nowhere then where nonhuman animals can go and be left alone?

And that is why we mourn Cecil, he is all the animals cruelly harmed, all the wild places torn asunder by greed. He is a wounded, crowded planet trying to be a community but violated by the darkness of greed and power. Without spaces and places free from the influence of those who would kill endangered animals – itself a violation of our right to a diverse and profound wild – none of us are free. We recognize that intuitively and we are outraged. We know that killing threatened and endangered animals (or imprisoning them in zoos) isn’t conservation. It’s just killing and exploitation.

At the heart of the fury and grief expressed over Cecil, we find two things: compassion over his suffering and an overwhelming sentiment of “leave lions alone!” Collectively, society expresses that sentiment so rarely, because it is silenced by the dominant (and incorrect) view that freedom means power, not consent.

In part because of poaching like this, lions will likely be extinct in the wild in our lifetimes. Here, in this moment, we recognize Cecil was not an individual’s to kill but rather ours to value, even if we never knew him or of him. His refuge was our refuge, and his ability to be left alone was a measure of our ability to be left alone. People are outraged because he represented real freedom, now and for the future.

As our human population continues to expand exponentially, far beyond the resources the planet provides us, large mammals like lions will become even more vulnerable. Already, lions are reproducing more slowly than the rate at which they will be poached. Because of population growth, climate change, industrial agriculture, and aggressive poaching like this, future generations will probably never have the privilege of living in a free world with wild lions.

Who are the people we want to make up our society? Are they greedy, bloodthirsty, power-driven trophy-hunting killers with an unquenchable hunger to deprive the rest of us (including future generations) of the freedom of the wild by exerting dominance over it? We create future generations and we create values in a democracy. If we value freedom we must value wilderness and wildness, and our wildlife trafficking, poaching, and trophy-hunting laws must reflect that.

Sign and share this petition asking U.S. Fish & Wildlife to protect our freedoms by fast-tracking the listing of African Lions as an “endangered species” and prohibiting the import of wild lions and their body parts (like Cecil’s head) as “trophies” in the U.S.

4 thoughts on “The Heart of Freedom – Cecil the Lion”